Hey, I’m not the only one who thinks Bardstown, Kentucky is a gorgeous place. Notable travel magazines such as Rand McNally and USA Today both named it the “Most Beautiful Small Town in America” (several years in a row, in fact). This honor didn’t just come on a whim but following a lengthy coast-to-coast search by a panel of judges with a long list of qualifying markers.  Bardstown was the smallest city on that register but made the number one spot. One judge remarked it won for both external and internal beauty. It is the definition of this community.

Rightly so. Bardstown was founded in 1800 by two Bard brothers. Behind Harrodsburg, this is the second oldest town in Kentucky. Many of its original homes, dating throughout the 1800’s, are still standing and well-cared for. More than three hundred of the most historic houses are on the National Registry of Historic Places; nearly two hundred of them crowd the downtown district.

History smacks one in the face in Bardstown. There is a well-preserved and still well-used section of road – very rough and rocky, only a block long and used exclusively for foot traffic now – that is the last original pathway trod by Daniel Boone as he led settlers through Kentucky.

The Civil War came to Bardstown, but, because Kentucky was a border state, the skirmishes were light. No Sherman’s march here. There were no houses were burnt to the ground as in other states; hence the well-preserved, brick and pillared homes on wide, tree-lined streets.

Among these gracious homes, two stand out: Wickland is a three-story Georgian style mansion that was home to three different governors of two different states, two for Kentucky, one for Louisiana. Built between 1825-1828, Wickland is open for tours and private events. 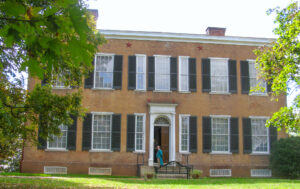 Most famous of all, is Federal Hill, a Federal-style mansion of over seven thousand square feet that sits at the heart of Kentucky’s most visited state park. Known as “My Old Kentucky Home” this is the place loved and often visited by Stephan Foster, considered the father of American music and America’s greatest songwriter. Here, he wrote his great anti-slavery ballad My Old Kentucky Home, Good Night which raised social consciousness of equality. Eventually that mournful and timeless song became Kentucky’s state song and gives everyone an emotional jolt as the horses’ step onto the track before every Kentucky Derby.

Despite its long and distinguished history, Bardstown has always rolled with the punches and led the way in modernity. It is a lively, spontaneous place where good times can be found daily, rolled up in Southern charm.

The little downtown is the heart of Bardstown action any night of the week. Upscale restaurants and pubs provide not only quality home cooking but entertainment like trivia night, where big groups of fun-sparing teams come to best each other. Family Feud and karaoke nights are well-attended, too. 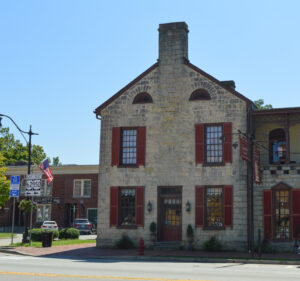 Perhaps the most well-known dining spot is the Talbott Tavern. Built in 1799, the Talbott was originally a stagecoach stop for weary travelers.  Eventually, many famed historical people enjoyed a stay here: Abraham Lincoln, Daniel Boone, Washington Irving, perhaps even George Washington! One man who was a frequent visitor and who literally left his mark on the place was Jesse James. Upstairs, in a room open to visitors are bullet holes Jesse left in the walls after some altercation or temper tantrum. The hanging plaques explain it all.

The Talbott is known to be the oldest continuously operating pub west of the Allegheny Mountains, with original flooring, and bricks. Six rooms are available for lodging, but beware, it is thought to be haunted! More than one tourist has reported seeing or hearing Jesse walking about late at night. The Talbott has one of the most extensive bourbon bars in Bardstown and great dining, so there are two more reasons to put the place on your bucket list. 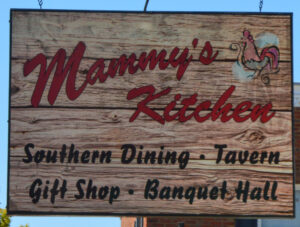 Mammy’s Kitchen is another dining mecca. Owned by a woman who loves Southern cooking, the recipes are from her Mammy’s cookbooks, each-and-every dish from scratch. Breakfasts are huge at Mammy’s tables.

Downtown, although only a few blocks long, is filled with upscale, eclectic shops. Clothes, home furnishings, jewelry, Kentucky memorabilia, the shops in Bardstown have something for everyone. The fine art gallery is filled with works of local artisans, reflecting the history and personality of both the artist and area.

Friday night is the most lively in Bardstown. At least six places in a two-block area welcome live entertainment, from local favorites to the up-and-coming.

Because of the proximity to Nashville, Tennessee, (2 ½ hours away) singers on their way up are often found on a Bardstown stage Friday night. Apparently, a Bardstown engagement looks good on a rising star’s resume. The town comes out to cheer everyone. Favorite local singer/songwriters are especially popular and always find smiling, familiar faces in the crowd. 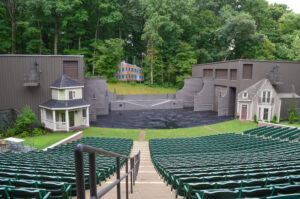 Entertainment is not just found on the stages of local pubs. From June to August on the outdoor stage of My Old Kentucky Home State Park, The Stephen Foster Story, a colorful, high-energy show, which has been running more than eighty years, alternates with another more modern musical. That story changes every year. Past performances have included Mary Poppins and Joseph and the Amazing Technicolor Dream Coat. 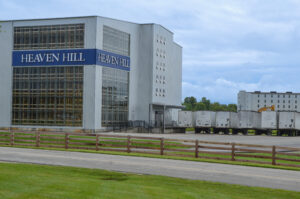 Then there is bourbon. Because of the thick layers of natural limestone that filters streams and rainwater, Bardstown has some of the cleanest, best tasting water in the world. Just what is needed for bourbon. Under some distilleries, the limestone is as much as two-hundred feet thick, purifying the water every inch of the way. Louisville, to the north, has been certified to have the second or third purest water in the world. Early pioneers in spirits made the connection and Bardstown became the “Bourbon capital of the World”.  Renowned companies such as Barton 1792, Jim Beam, Makers Mark, and Heaven Hill are centered in or near Bardstown.  Within an easy hour’s drive will bring you to lifelong favorites Four Roses, Wild Turkey, Buffalo Trace, Woodford Reserve, Towne Branch, and Old Forester, just to razzle dazzle you with a few. A new crop of half a dozen distillers has opened in the area in the last few years and are producers of great spirits: Preservation, Lux Row, Willits, Bardstown Bourbon Company, Limestone Branch, Log Still … on and on. Even a bit farther out are more distilleries of note.  It’s easy to see why the Bourbon Trail is currently the main focus of the local vibrant tourist industry.

Side note, fun fact. Limestone is also the reason the horse industry began in Kentucky. Calcium rich grass grows up from that limestone, giving new foals a natural source and supply of bone strength. We love our limestone!

Bardstown loves multi-day festivals, too. Annual ones include the Bourbon Festival, which takes place for an information- and tasting-packed week in September, drawing thousands of people from around the world.

The Arts and Crafts Festival is a jammed packed three-day event in October, covering four to five city blocks and a massive tree shaded open space. Smart, talented artisans display their wares in every genre imaginal; jewelry, painting or drawing, fabrics, welded garden art, ingenious bourbon barrel furniture – again, on and on! Often, antique cars are lining side streets and children have a massive play area by all the food vendors. This one really draws crowds in.

Bardstown is a happy, lively place where everyone is welcome and catered to. If you have time, drop by.  We’d love to see you.