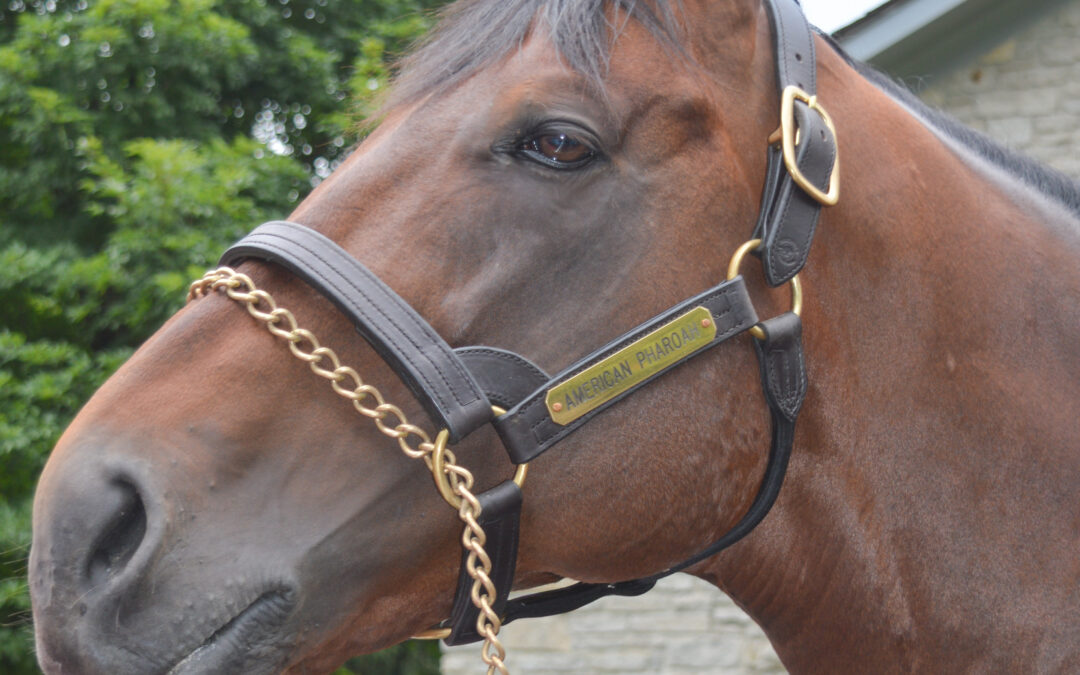 Coolmore is the dream destination for horse worshippers – on three continents! 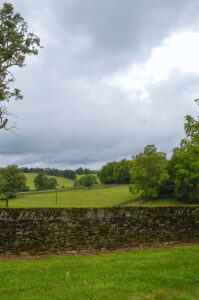 Here, international breeding of elite thoroughbreds takes place. Tours of this classy farm and up-close-and-personal viewings of these beautiful horses are well worth the small price of admission.

On a recent visit, my group of fifteen were led by Susan, a vibrant, witty, and deeply knowledgeable woman. Originally hired to do light office paperwork, she quickly came to know and love the famed horses housed there and had fun antidotes on their personalities and preferences.

The experience of Coolmore starts at the entrance. Here, an elegant, iron gate slowly swings open revealing a wide, shady lane with no end in sight.

The lane is ramrod straight, but undulates, revealing the vastness of the farm in bits and pieces. A narrow stone bridge over a rushing brook begs for a photo. Several small turnouts taunt the driver to enjoy the views of fields of horses. It all seems more like a park than a working farm. Susan agreed, stating she spends her lunch hour walking the paths and walkways about the farm, under shady trees, between stone walls, or beside the brook. Workers and their families have homes scattered about the huge place, where they live in a secure environment, looking out over stone fences at fields of horses. Butterfly gardens dot the property and are gorgeous. Heaven on earth.

But a working farm it absolutely is! On the combined twenty-five hundred acres, hay, corn, and other necessary crops are grown. Tractors pulling combines or other machinery are spied along dusty gravel roads in the distance. Everything centers around the care and needs of the famed residents.

The tour begins at the Visitor Center, where everyone signs in, and instructions begin. “No sudden movements,” “No loud noises,” “No loitering or lagging behind the group,” and above all “No petting or touching the horses.”  That last edict seemed cruel to a horse addict. 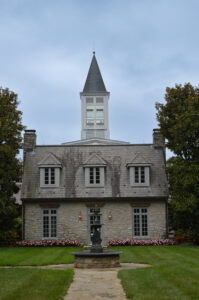 Susan gave us a rundown of the equines we would be treated to: American Pharoah, Justify, Maximum Security, Caravaggio, Cupid, Mendelssohn and more. All the fifteen strangers felt the thrill. 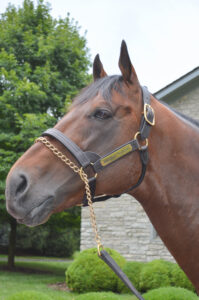 American Pharoah (by Pioneer of the Nile and Littleprincessemma), now ten years old, had a lackluster start in his two-year-old initial season. He finished fifth in his debut race, then won his next two by several lengths. An injury kept him from prominent races later that year but still won the 2014 American Champion Two-Year-Old Male Horse at the Eclipse Awards.

But he burst on the scene as a three-year-old in 2015. After a thirty-seven-year drought, American Pharoah blasted to the lead in the Kentucky Derby, the Preakness, and the Belmont Stakes, securing his place in history as the twelfth Triple Crown Winner. The Preakness was run on a sloppy, wet track but he won by multiple lengths, also in the Belmont Stakes. He was guided by famed jockey Victor Espinoza in all three races and trained by Bob Baffert.

Later that year, he stunned by winning the Breeders’ Cup Classic at Keeneland, making American Pharoah the only horse in history to win the Grand Slam of Thoroughbred Racing, the four most prestigious races in a single year. This is truly remarkable.

Plus, American Pharoah is a beautiful gentleman. When paraded out to our group of fifteen, he preened, like on some celebrity red carpet. He posed perfectly for pictures, looked everyone in the crowd in the eye, turned his head just so, and held still for every photo. 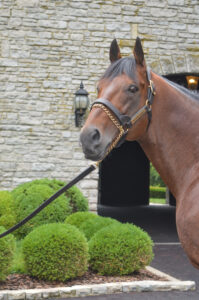 This is a classic looking thoroughbred. American Pharoah is a bay, with a tiny white star on his forehead; that is the only coloring on him. He is lean and muscular. This horse is intelligent and kind. He knows his status in the racing world but is calm and serene. This small audience adored him, and he adored us back. It was a perfect moment.

His handler, a man from County Kildare, Ireland, who travels the world with American Pharoah, stated he is always this way. Not fussy, not demanding, just knows he has a job to do and gets it done. 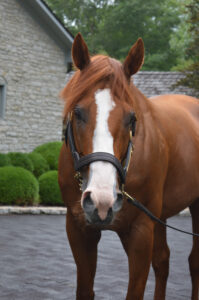 Justify (by Scat Daddy and Stage Magic) made history in outstanding ways in 2018. He became the thirteenth Triple Crown Winner, a massive feat on its own, but he did it without ever entering a race as a two-year-old and was undefeated at retirement, which was a few weeks after the Belmont Stakes. Only one other horse in history won the Kentucky Derby without racing as a two-year-old, Apollo, and that was in 1882.

Only one other horse won the Triple Crown undefeated, that being the remarkable Seattle Slew in 1977. Justify’s linage traces back to six Triple Crown Winners: Seattle Slew, Secretariat, Count Fleet, War Admiral, Omaha, and Gallant Fox, plus the English Triple Crown Winner, Nijinsky. Hats off to Justify, now seven years old! That is a quite an impressive bloodline.

In races one and two, the Kentucky Derby and Preakness, he won on nasty tracks. Both courses were sloppy from rain and thick fog descended during the Preakness. Still, Justify won both easily. The Belmont Stakes was a picture-perfect day and track, and the win was easy. Hall-of-fame jockey Mike Smith was in the irons and, again, hall-of-famer Bob Baffert was the trainer.

Justify stands out in looks. He is a regal chestnut color, and a wide blaze runs the length of his face. Unlike his stablemate, American Pharoah, Justify is a character. Described by Baffert as a bit dominant, pushy, and little patience with people, in front of our group, Justify entertained being very clownish. He pranced out of the stable, then began a tug-of-war with his handler over the lead. Justify had the lead in his mouth most of the time he was shown to us. It was fun to watch, we were all laughing. His handler said he likes to invent games in front of crowds. When the sun broke from the clouds, his chestnut color glowed like polished copper. Truly breathtaking. 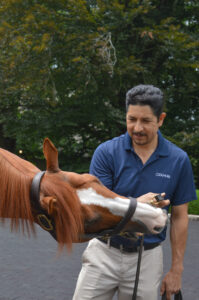 Justify was slated to enter the Breeders Cup in 2018, with the hope of being the second Grand Slam of Thoroughbred Racing winner, after American Pharoah, but disappointingly, a slight ankle injury kept him from that. He was retired in July 2018 and began his stud career.

Besides the two Triple Crown Winners, Coolmore has a stable full of remarkable equine athletes. These include: 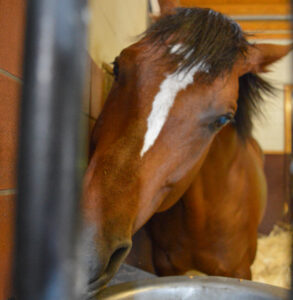 Maximum Security is a lovely bay with a bumpy record. Although he crossed the finish line first in the 2019 Kentucky Derby, he was disqualified for interference, being only the second horse in Derby history to have this unfortune. The disqualification is still controversial. He bounced back. In early 2021, he won the Saudi Cup, the richest horse race in the world at $20 million. No denying that win.

Caravaggio is a stunning grey horse, bred in America but trained in Ireland.

He was deemed one the finest colts of his generation in Europe, unbeaten in four major races there while only two-years old. As a three-year-old, he had six victories in major European races. Famed Irish trainer Aidan O’Brien said he was the fastest horse he ever trained.

Cupid, sired from Tapit, is another grey, known for winning numerous graded stakes races. In 2016, he was the favorite going into the Kentucky Derby, but was pulled out due to a breathing problem.

Tiz the Law is a bay with a wide white blaze. He was second in the 2020 Kentucky Derby and won the Belmont Stakes that year. Various other noteworthy wins are under his belt. Although currently at stud in Australia, Susan reports he is the stable gentleman and absolutely adores women. If a female visitor speaks to him, he becomes attentive and shy. Tiz the Law should be back at Coolmore in January.

This is only a short list of the historic horses stabled here. Plan a visit.

Coolmore started in Ireland. http://coolmore.com/farms/ireland Begun in 1975 by John Magnier in Fethard, County Tipperary, Coolmore Ireland takes advantage of the rich limestone soil, which naturally provides a host of nutrients, including calcium in the grass. On over 7,000 acres, this is an outstanding environment for breeding and raising champions with world renowned trainer, Aiden O’Brien at the helm.

Coolmore Australia, http://coolmore.com/farms/australia is the newest stud farm, coming on the scene in 1996. Situated on more than 8,000 acres of prime agricultural land, this state-of-the-art facility caters to all horse needs from breeding to foaling to long-term care. Winx, the now retired, but adored Australian undefeated mare, is housed here.

Coolmore America offers superior, personal tours of small groups. Bookings need to be made through https://visithorsecountry.com or by calling 859-963-1004. Plan on walking the better part of an hour, through the stables, to the breeding barn, and paying homage at the cemetery. Tours happen rain or shine. For racing enthusiasts, it will be a memorial day.