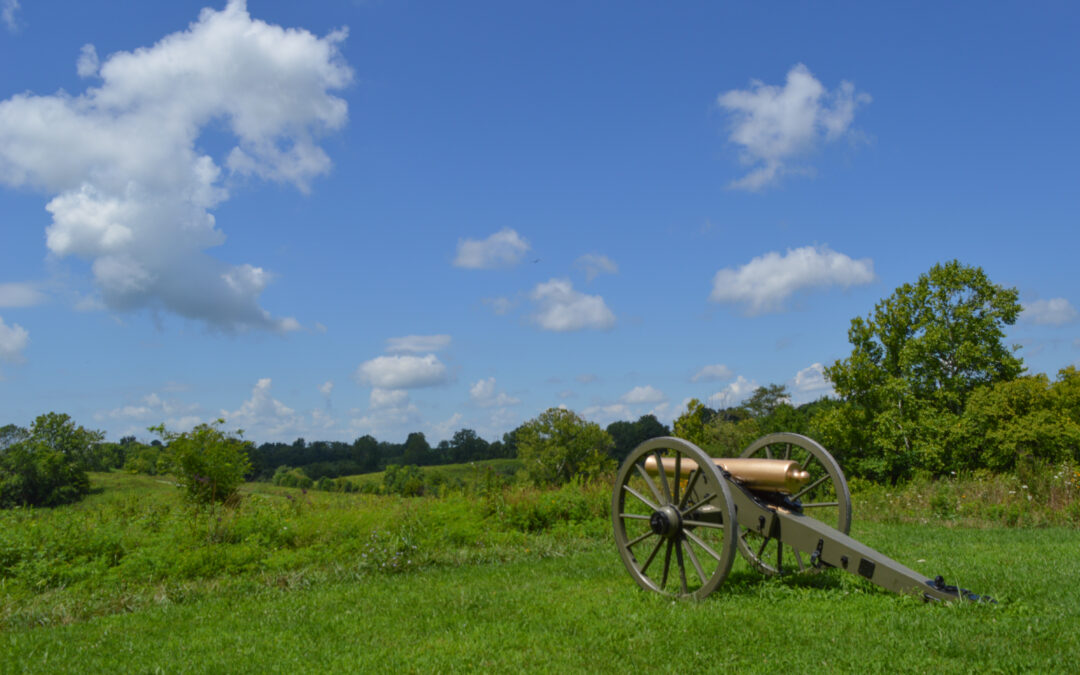 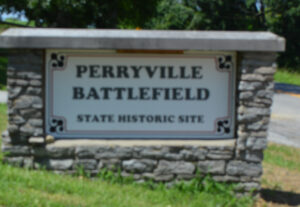 Perryville lies in the graceful rolling hills of central Kentucky. A small town on the banks of the Chaplin River, this ideal village was abruptly hurled into history in October 1862, when it became the site for the largest Civil War battle in Kentucky. https://perryvilleky.gov

The fall in 1862 was one of the driest in the history for the state of Kentucky. Armed forces hunted for any source of water. Perryville is situated at a confluence of roads leading to Harrodsburg, Danville, and Lexington. Rumors abounded there was abundant water in Chaplin River which splits the town.

With that being the driving force, both Union and Confederate armies steamed towards Perryville. The combined armies contained 71,000 forces and arrived at the same time. A major conflict began.

Sadly, the rumors of overflowing rivers were false. The soldier’s reality was that the Chaplin and all tributaries were essentially dry; only stagnant pools dotted a few areas of creeks. These pockets of water provided enough dirty water to fill a limited number of canteens, certainly not 71,000. Most soldiers were too exhausted for a battle. No one had the food or water to sustain themselves through one. Many ragged combatants begged to keep moving north to the Ohio River. That was not to be.

The armies met, by surprise, in the fields west of town. The Confederates were led by General Braxton Bragg, the Union by Major General Don Carlos Buell. The battle started early in the day, around 2:00 a.m. Both sides were hungry and desperately dehydrated.

The gentle Chaplin Hills, where the battle raged, are deceiving in that they have pockets of ‘optical illusions,’ where perceived distances are not accurate, causing cannon shots to be hopelessly short of the target, and ‘acoustic shadowing’ meaning in certain spots on the battlefield, sounds were muffled or absent. Officers at headquarters a mile or two away were misled by this, believing the battle was light, thereby not sending in reinforcements at crucial times. 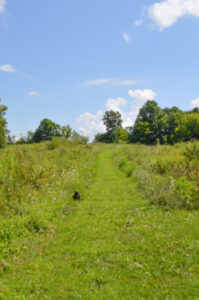 In reality, the fighting throughout October 8th was ferocious. Doctor’s Creek, then dry, coursed with blood. Noted Confederate diarist, Private Sam Watkins shared memories about Perryville repeatedly during his years.

“I was in every battle, skirmish, and march that was made by the First Tennessee Regiment during the war, and I do not remember of a harder contest and more evenly fought battle than that of Perryville. If it had been two men wrestling, it would have been called a ‘dog fall.’ Both sides claim victory – both whipped.” Private Sam Watkins, First Tennessee

In a later article, Watkins, part of a hand-to-hand fight for possession of four Union cannons wrote “such obstinate fighting I never had seen before or since … the iron storm passed through our ranks, mangling and tearing men to pieces.” At the end of that nasty skirmish, Watkins would discover both his hat and gun pouch had been shot through by enemy bullets. 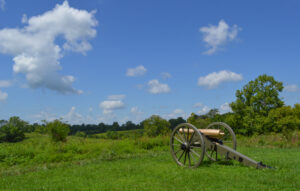 Again, by Watkins, of Perryville, “the guns were discharged so rapidly, it seemed the earth itself was in a volcanic uproar.” Sam Watkins, First Tennessee

Watkins was not the only one to remember the battle:

“For the time engaged it was the severest and most desperately contested engagement within my knowledge.” General Braxton Bragg, Confederate Army

“It was like running a marathon, over fences and ditches and cornfields, the enemy ahead and we in pursuit. At times, we were so close that I was once able to give a Rebel a kick in the rear.” — Arthur Siver, 15th Wisconsin

“… hundreds of balls came so close to my head and face that I could feel the wind of them … add to the musketry the whirring of solid shot, the screaming and bursting of shell … it was as near pandemonium as I care to get.” William Cunningham, 59th Illinois wrote to his wife.

Perryville was declared a Union victory, but it came at a huge cost to both sides. Of the 55,000 soldiers on the Union side, over 4,200 perished there. The Confederates engaged 16,000 men and lost over 3,400. Men from both sides would later succumb to Perryville wounds, but that number is not officially known. This battle was judged to be the second bloodiest in the Western Theater, after Shiloh (at that time).

For nearly one-hundred years, Perryville survived, growing, living, and returning to small town status. But, throughout those years, people agreed the battle site in their backyard needed to be preserved and protected.

Today, Perryville is considered one of the nation’s best-preserved sites. It is silent, hallowed and under superb care. Of the almost 8,000 lives lost there, few received a proper burial. Most are still lying where they fell. The locals and community groups who became devoted to the care of these fallen heroes over the years planted native wildflowers and grass over the battlefield. The vast acreage is in bloom the majority of the year. By doing so, it became a nature preserve by default. Many species of butterflies, birds, nocturnal animals, wild turkeys, and deer find refuge here. Doctors Creek is a pleasant babbling brook and place to soak hot feet right off Bird Trail. 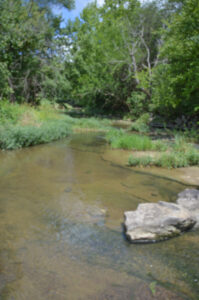 The majority of Perryville is park property, thanks to the Civil War Preservation Trust, allowing visitors to walk the nearly twenty miles of paths among the wildflowers and experience the fights in an almost real time feel. Not just from a soldier’s point-of-view, but from civilians who were caught in the conflict, as well. Numerous plaques and panels are placed throughout the battlefield with educational information as to what happened that day at a specific site. Like the family caught in the cabin as soldiers came rushing by, bullets flying, who chopped a hole in the floor and hid in the root cellar for days, hoping their home would not be burned or destroyed on top of them.

Or the testament to Widow Bottom, who was butchered in her home while saying her prayers by three intruders. Her young granddaughter watched in silent horror, later identifying the men.

Other panels describe exactly what micro-skirmish took place at that site, who was in charge, the numbers of the enemy, who fell and who survived. Quotes from dozens of letters and diaries fill the panels. It is a timeless testament to and from all our ancestors.

The Perryville Battle Site has a small Visitors Center with a museum and gift shop. Extremely knowledgeable staff offer trail advice, maps, water, hats and can answer any question. A solemn Confederate cemetery site and picnic area are adjacent to the Visitors Center.

Perryville center is a worthwhile destination, as well. Still small and unassuming, the town straddles the Chaplin River with shops, restaurants, and annual festivals. The most important festival emphasizes the long-ago battle, with an annual re-enactment of the conflict. Thousands of history buffs either watch or help recreate that fateful day. The re-enactment happens as close to October 8th as possible.

Ghost seekers and those interested in paranormal activity flock to Perryville. Sightings and cries for help are seen and heard frequently on the battlefield and throughout the town. It is said this town is home to more ghosts than live people. Since Perryville is considered a living museum with a violent history, this makes sense.

Here is a place Kentuckians, especially, should be proud of and revere. It has deep roots and meaning for everyone and will have a profound impact on anyone walking on its historic paths. One visit will not be enough.