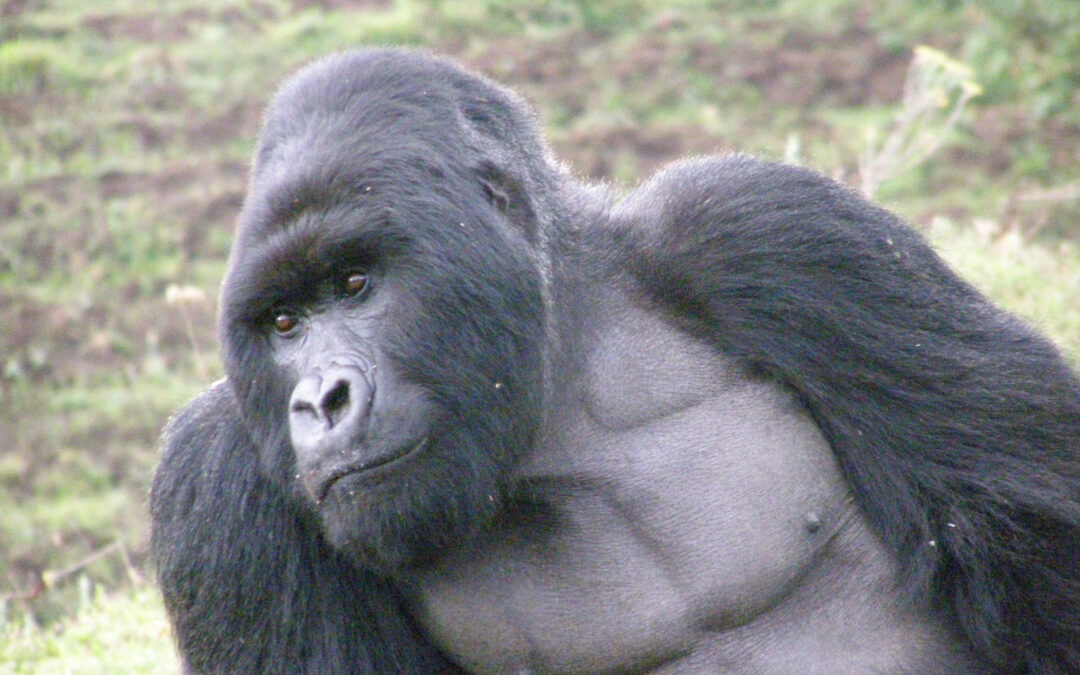 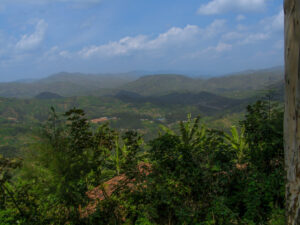 Several years ago, I returned from a medical missionary in Rwanda.  Although most of my time was spent in the small, isolated hospital of Muganero, there was fun to be had, as well. So, share Rwanda with me.

This is a completely land locked East African nation of a little more than 10,000 square miles, making it slightly smaller than the state of Maryland. It is nicknamed the “Land of a Thousand Hills” but there may be that many hills at the airport alone. It is a very mountainous country.

Kigali, the capital, is over 6,000 feet, about the same elevation as Colorado Springs.   Muganero, where I worked is over 7,000 ft.  Because of the elevation, the average year-round temperature is between 66-70 degrees F.  Very pleasant and appreciated, since Rwanda is only 50 miles south of the equator.  The humidity was high, but the temperatures were wonderful.  The evenings and mornings were chilly enough to wear a fleece jacket.

The official language is Kinyarawandan, but French is commonly spoken, as well. Recently, the President (Paul Kagame) has declared English will be taught in schools and will become the second official language within 5 years (or so).  Everyone wants you to practice English with them.  Anyone considering teaching English as a Second Language somewhere would have no problem finding work in Rwanda.

Kagame is an interesting character.  A survivor of the 1994 genocide, he led a resistance group during that time and worked his way up to the Presidency.  He is making Rwanda a model African country; it is clearly a rising economy and his way of leading is being closely watched throughout Africa.  One thing banned is plastic bags.  Kagame feels plastic bags too much oil in production and are a cause of much litter.  He’s stated everyone who can work, will work.  Nearly every citizen is employed in some capacity.  Despite employment, though, beggars still hold out the hand and plead as you walk by.

Rwanda is noticeably poor but incredibly clean. A country nearly devoid of litter.  I felt very safe there and absolutely admired the cleanliness.  So different from other developing countries.  Due to the numerous hills, smog can be a problem but even that was minimal.

Although there had been some ethnic violence in the 1950’s, Rwanda caught the world’s attention in 1994 with its violent genocide.  Tragically, no nation came forward to help.  The U.S. had only a year before been involved with the Black Hawk Down situation and did not want to become entangled again.  The UN watched Rwanda but offered no help.

The genocide began April 6th, 1994, and lasted 100 days.  But in that time, it is estimated 800,000 minority Tutsi’s were systematically hunted down and brutally executed by the majority Hutu’s.  As bullets were too expensive to waste on the “cockroach” Tutsi, many killings were by machete, clubs, grenades or being buried alive.  No one has yet been brought to justice for any of this, although some effort is being made.  It won’t be easy to bring anyone to trial, as this was a government mandated and supported slaughter.  The numerous memorials are profound and painful.

Muganero literally sits at the end of a narrow, pot-holed dirt road on the shores of Lake Kiva. On the opposite side of the lake is Uganda, where, apparently hidden armed guards watch the lake activity. Any boat crossing a certain distance on the lake may get fired at. The jungle comes right to the shore on the Ugandan side. 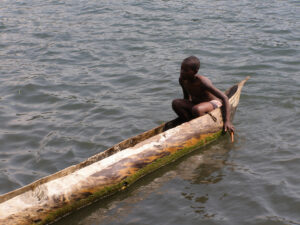 The land around Lake Kiva, in Rwanda is cleared for coffee growers. The plants are beautiful, the hills are greener than Ireland, the coffee delicious.

Muganero suffered badly in 1994. The town was nearly destroyed by the fighting. The hospital we came to help tried to shelter 5,000 innocents; tragically there was no escape once inside. The Hutu’s threw numerous grenades into the helpless crowd, later torching the building. No one survived. Carved into the walls of the hospital and surrounding office buildings are the names of those of perished. A beautiful stone monument with a small waterfall sits in a small niche of the hospital for anyone who needs a break or a time of reflection. 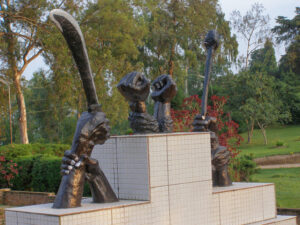 Once, while running between the hospital to the laboratory across the way, I took a shortcut across the overgrown lawn and was loudly rebuked by a group of workers. Quickly, I learned the grounds are a massive common grave. No one is allowed to walk on the lawn. The grass will never be cut. To this day, I feel guilty.

The community rebuilt the hospital. My group came to resupply it and get it back on its feet. For more than a year, the volunteers I worked with tirelessly crusaded to get donations, both new and used, of every piece of equipment needed to resupply a hospital. Entire surgical suites, Emergency rooms, hospital beds, X-ray equipment, dental chairs, laboratory stations, IV stands, catheters, sterile bandages, mounds of sheets, towels, and the laundry machines to wash them in. Everything needed for a working hospital. It was daunting, but in the end, a massive freighter loaded to the rafters left the U.S. for Africa. 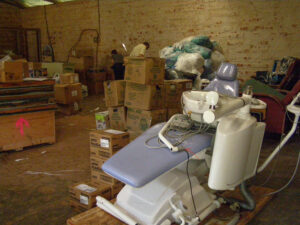 My job was teaching the two brilliant X-ray students. They were the definition of on-the-job-training, as neither had any previous training and we had patients from 7am until after sundown. 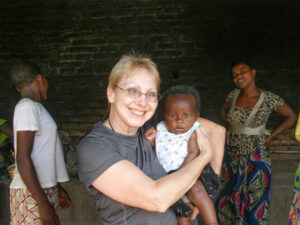 The X-ray students were orphans of the genocide. Both male, they were taken to the nearby orphanage at age 5 where they were raised and counseled and loved, with numerous other children, by a man from Germany who founded the orphanage. There, they received an education and help for their wounds, physical and emotional. No child ever left the orphanage until they could support themselves. The hospital, in their backyard, gave many of those children a lifelong career.

My time in Rwanda was not all just work and sadness.  I truly had a wonderful time.  The ‘playtime’ highlight was my day at the Mountain Gorilla Sanctuary.  The same ground Dian Fossey ran around during her time in Africa.

One early, chilly morning, an international group gathered at the Volcanoes National Park to be driven up into the hills where we would hike for an unknown time and distance, looking for Mountain Gorillas. We may be lucky or not. There was no guarantee. 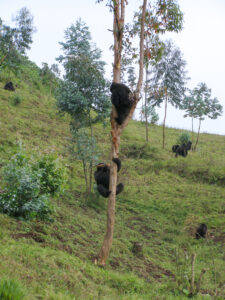 The hike began in a cleared field after a thirty-minute drive. We walked between rows of corn and mounds of potatoes uphill, always uphill. We were headed toward the edge of the thick, dark jungle where the gorillas may or may not be, but where it was certain to be pitch-black and we would not see them before they saw us. There was tension. The guards with us carried ancient rifles, in case one attacked.

But before we reached the jungle, a family ambled out of the darkness toward us. It was both terrifying and spectacular. My heart was pounding in fear and joy. We turned right and followed them. 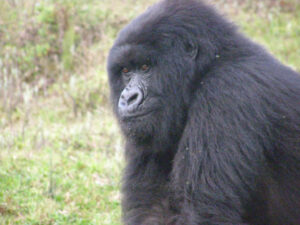 The group of gorillas my group followed was the largest known in Rwanda.  It consisted of a great silverback, his 9 wives and all the children.  There were 23 members of this group.  The youngest was just a month old.  So darn cute! 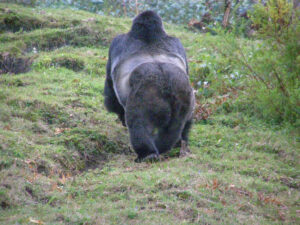 I expected to see gorillas. I did not expect to be walking among them.  You go in as a group of 8, with 2 guides.  The guides keep you pretty much packed together but, as a group, you are safe.  One straggler can be very vulnerable to an attack.  Because they keep you bunched together, you can get about 10 feet away from the animals.  The gorillas see many visitors, they don’t pay much attention to humans.  You really are close enough to look them in the face and smell them.  It was a fascinating time.  The babies stay close to Mom but, also play and swing from tree to tree.  A lot of laughs.

Following us was a small party of veterinarians. One of the babies was noticeably ill, weak, lethargic, constant diarrhea. This one was very clingy to mom and she to him. The veterinarians were waiting for our group to disperse, then they would work to separate the mom and baby for treatment. Three or four of them against a huge silverback and 9 other moms. I did not envy them.

Rwanda is a remarkable country.  It is very fertile, several growing seasons, lots of vegetation and so many plants.  Gardeners are thrilled with the gorgeous plants growing with abandon.

Two African “things” I was thrilled to experience started with a chorus of young adults.  Their voices were incredible.  No music accompaniment, just these rich, rich voices.  They met in a decaying abandoned church, practicing for an upcoming competition. Several members seemed nervous having strangers crowd at the windows, but our deafening applause released enormous smiles.

The second was an African rain.  What an experience!  First came tremendous thunder and lightning, then intense warm rain that lasted the better part of an hour. With the rain came sharp, clean smells of rich earth, ripe bananas, and flowers. It was fabulous.

Because of the altitude Rwanda has the clearest skies and brightest stars I have ever seen. The Milky Way seemed within my touch.

Rwanda is a long flight and a very different world away, but worth the effort.  Once considered one of the poorest nations on earth, it is now the shining example of economic recovery and is a model for all nations.

Consider a trip to Rwanda.  You will be met with friendly, interesting people and clean, vibrant colors.