It had rained hard throughout the night on the West Highland Way. By 7 a.m., I was feeling anxious to begin. Today’s hike was over fourteen miles, and I knew I would be slow.

The air was heavy with moisture when I walked through Drymen to the West Highland Way trailhead, a mile-and-a-half away. It was Scotland’s two-week-long Easter Holiday break; I passed the empty school, buses parked ready to go. The world was quiet on that overcast that Wednesday morning.

The West Highland Way began at an isolated car park, where a man was taking the leash off his young yellow lab. The dog exploded into a frenzy of excitement over his morning run and bounded to me for petting. The man and I laughed over his antics and walked a hundred yards together. Doggy was sprinting ahead of us. As he followed doggy on a trail to the right, he shouted, “You’ll enjoy Loch Lomond.”

He was so right. Within minutes, after a short climb, Loch Lomond suddenly stretched before me. Scotland’s largest and most popular loch, it would be the hiker’s companion for the next day and a half. At this point, the trail was wide and flat, in a forest that was being clear-cut, the loch still off in the distance. It was stunning, dotted with islands, all so blue, as were the hills behind it. Instantly mesmerizing to me. 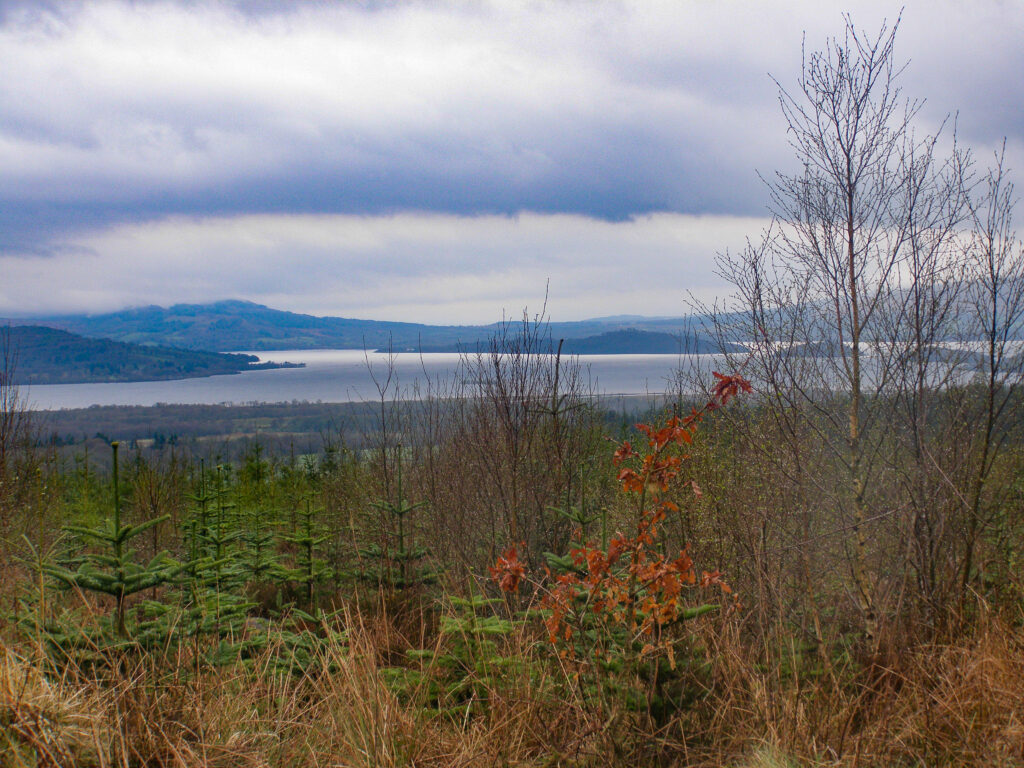 Within an hour of following the Loch, I came to a signpost and a decision; turn left for a major shortcut to Balmaha, the days halfway point, or take the left trail for a longer steeper hike up and down Conic Hill.

The shortcut was only two miles into Balmaha, and my day would be half over before noon, but would be on another road, with two-way traffic. The Conic Hill trail was miles longer, but in the wilderness, fresh air, deep valleys, a true wilderness track.

My feet were okay, aching a bit, but okay. I hated the thought of more time on roads but decided it was better to shave miles off the day. A pleasant German couple, coming out of the forest, challenged me. “You can do it! You did not come all this way to not experience Scotland!” I followed them up the right-hand trail.

Immediately, it was real and raw. The valleys were isolated and expansive and absolutely empty. As the German couple outpaced me, I felt like the only person left in the world, no sounds but wind, distant bleating of an unseen sheep, and the occasional screech of a bird overhead.

It was a pleasant hour chugging up the back side of Conic Hill, before swarms of other hikers came into view and began overtaking me. My feet were sorry I had chosen this route. The last half mile to the top was steep and slippery; last night’s rain had turned the trail into mud and the jagged rocks making up the path were treacherous.

The views of Loch Lomond at the top of Conic Hill were picture postcard perfect. The descent became a nightmare.

I cannot remember a steeper downhill than this one, and I have hiked in Nepal and Alaska. There was no place to get any firm footing on this sloppy path. By now, dozens of West Highland Way hikers were passing me from the back; this section was taking everyone by surprise. The scene ahead of me was not encouraging, as many were slipping and falling. Others were slowly making their way off the trail to the grass, but that was equally slick.

More than one hiker chose to sit down and get a thoroughly mud-covered bum, but safer descent. I stayed on my feet, but my pace became snail slow.

About halfway down, split logs were placed across the trail to act as some sort of steps; however, their spacing was not even and knees began to burn.

By the time I reached Balmaha, it was about 2 p.m. and seven more miles including a very steep section still ahead of me. I was exhausted. Balmaha had a wonderful little café where tea and a sandwich improved my mood.

The first half-hour on to Rowardennen, my destination, was on a flat concrete trail hugging the shore of Lomond. I made up some lost time here. When the trail left the shore for the hilly forest, the ups and downs began, each rise more challenging than the last. Each passing hiker gave me copious amounts of encouragement.

Despite my fatigue, this area was uplifting. These last five or so miles were through lovely native woodland, sometimes hugging the shores of Lomond, where families and dogs were playing in the coves. The ascents took the hiker farther away from the loch but brought more expansive views.

Rowardennen was a welcome site. The last hiker in, I collapsed in the reception area chair, unable to even stumble to the shed where my luggage sat solo.  The hotel owner got my suitcase, helped me to my room, made me tea, and gave me a serious talk. Tomorrow’s walk was the worst of all. Tomorrow’s trail narrowed to the equivalent of a goat path with no cell reception, no towns, villages, or houses. If a hiker got into trouble up there, it would be a call for Mountain Rescue.

I thanked him, said I would think about it and see him shortly in the dining room. But my feet made the decision for me.

When the boots finally and painfully came off, my heels were swollen and crackling when I flexed my feet. Both Achilles tendons were pulled and extremely sore. The fear was, if one tendon snapped, I would be an immediate medical emergency.

Unable to get any shoes back on, I shuffled down to the dining room in socks and joined the English couple for dinner. By now, I had formed a bond with them, a couple from Denmark, a father/son from Ireland and the German woman I walked with on the first day. They were all in the dining room and horrified at the sound of my feet. Everyone encouraged me to stop for a day or two. I knew I had to.

So, we all laughed with relief and raised a toast when the hotel owner, serving dinner to the Irish, announced he had already booked me a taxi for tomorrow morning.